I have made almost a hundred recipes with corn in the past three weeks- but in my head; and each of them was fantastic… lol

I decided to leave the fantasy world and make them come alive… This was my first- Corned Spinach! I really like spinach; I add it in my meals and smoothies, so I thought to try it with corn as is my newest food obsession. My love for corn though… I wrote about this in my last post.

This recipe is simple to make; plus my secret ingredient is Cameroon black pepper (that’s supposed to be a secret o… lol) Boil corn on the cob till the kernels are soft enough to be eaten. Proceed to decob the corn kernels.

Using some of the water the boiled corns were taken out of, boil the kernels in it for 5 minutes. Then add salt, garlic, olive oil, ginger, onions and Cameroon black pepper to taste. Leave to boil for 15 minutes. Add shredded spinach to the boiling corn soup. Leave to steam for just 5 minutes; you don’t want to kill the vegetables. Tags: Corn+spinach, Corned Spinach, corns, Onions, spinachlove, The Cons are Here, The corns are upon us 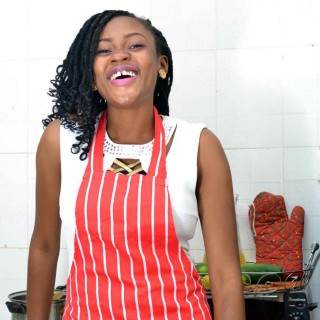 Hi. I'm Victoria Oluwagbesan. Dine as Royalty is about healthy eating. Enjoy the healthiest of meals as you try out our recipes and savour this majestic culinary.